The flounder bite is still on fire catching plenty of keppers and some flattys breaking the 7  pound mark. They have been falling for a variety of artifical lures, fresh live bait has been getting the job done as well.

Redfish have been feeding hard on lower parts of the tide mainly eating live or dead shrimp. They have been schooling in deeper pockets with structure near by, Little River Jettys has produced some of these quality fish and fishing docks along the ICW have been successful. black drum have been in all the same areas.

Cobia and King Mackeral have showed up in large numbers mainly fishing wrecks, live bottom and ledges 5 to 10 miles offshore. Kings have been easy to catch trolling spoons or dead cigar minnows for your schooly size fish, but the bigger fish have been caught using bigger live baits like Bluefish, Manhaden, or Mullet. the Cobia have been falling for bucktails tiped with large grubs and artifical eels, live bait has been key though using live river eels or manhaden.

Sharks have showed up and are biting good for anglers looking to get out and test there skills, there are many different species like hammer head, black tip, atlantic sharp nose, black nose, tiger shark and may more.

With the water temps starting to get to mid to low 70s the flounder bite has fired off in many of our local inlets. This year being one of the best I have seen in many years. We have been catching flounder in large numbers and some tournment winning size fish have been caught regurarly. Some of the best flounder to be put in the boat have been over 25" and weighing 6lb or more. I have personaly seen fish landed that hit the 30" mark by some lucky anglers out putting the time in and fishing hard. These flounder have been falling for a varitey of diferent baits such as scented artificals on jig heads being casted and worked slow on bottom or drifting them and jigging the bottom, live baits like 6" mullet, big mud-minnows, pin-fish, and anything else you can catch cast netting has been key to landing the big ones.

For the near shore bite Spainsh Mackerel, Blue Fish and Sharks have showed up and have provided a steady bite for customers wanting to target these species. At the Little River Inlet the Redfish & Trout bite stll remains steady using live shrimp under a float, Black Drum and Sheephead are also being caught on the rocks using fresh cut shrimp and fiddler crabs. Also offshore trolling has been very good with big catches of mahi-mahi, wahoo, and blackfin 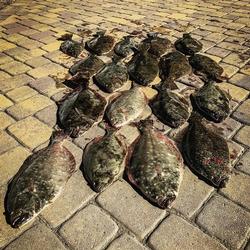 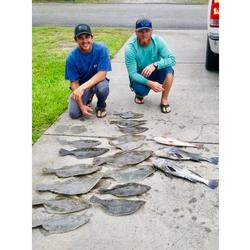 Spring is here and the bite is warming up with the weather. We have been able to stay on a consisent bite  with a wide varity of fish from Redfish, Trout, Black Drum, and Flounder to Spanish Mackeral, Blue Fish and much more. On the low tides we have had alot of success on shrimp live and dead targeting the black drum and redfish also for the reds a mudminnow on a jig head has proven to be great. The tout bite is one of the best ive seen in the past few years with fish ranging from 12in to 30in and they have been biting in all the creeks and around the inlet with the inlet producing the biggest on live shrimp.The flounder are showing up aswell with alot of throw backs and a few nice keepers mostly caught on mudminows and artifical jigs tiped with soft plastics with pro-cure scent. Spanish Mackeral and blue fish are being caugth with casting spoons and got-cha pulgs also trolling clark spoons behind planers. 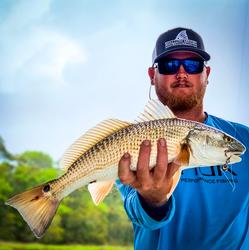 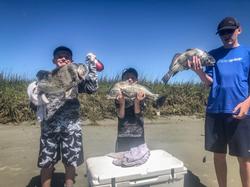 Today was yet another great day of inshore fishing in Myrtle Beach!  I had the pleasure of fishing the Mueller family, and although they were very new to inshore fishing, they proved that this style of fishing is not just for the avid angler!  On the way out, I explained to them that I’ve been catching a lot of fish on artificial baits and live baits, but both have been producing a large quantity and quality of fish! With just a quick five minute lesson on how to make an accurate cast and how to work jigs and mud minnows, they had it down!  Starting off on the top of the outgoing tide, we made our way to Sunset Beach NC, and worked small creek drains and deep holes around crab traps. With half the family throwing purple trout tricks around creek mouths and drains, and the other half using live mud Minnows on Carolina rigs in the deeper holes, we started a bite that seemed to never end!  Several  trout up to 14 inches were caught, and yet again, another phenomenal flounder bite that yeilded several keeper fish with many marginal fish in just a short amount of time.  As the tide began to fall and the current picked up a little harder, I worked my way back further into the creeks to fish smaller drains and grassy shoreline with less current. With a few more flounder caught, we weeded through a few more short fish and ended up with a decent redfish in the mix. The finger mullet are also becoming big enough to throw a cast net on, ive been finding them on low tides around creek mouths as well.  This is one of my favorite redfish baits in the late spring/early summer! Book your Myrtle Beach fishing charter today!

The inshore fishing in Myrtle Beach remains stellar!  Since the flounder bite has been so steady and producing a large quantity of quality fish, I let the charter (Saul and Doug) know that first thing in the morning.  Being from New Jersey, they were down to target the flat fish that is also popular in the back bays and ocean in their native waters of New Jersey. Starting off on low tide, I had them throwing mud minnows on  1/4 ozjig heads and  purple trout trick worms on 1/8 oz jig heads around the mouths of creeks and in the deeper pockets of water in the middle of the creeks of Sunset Beach NC. Working the Trout Trick worm very slow and steady, yeilded several flounder, ranging from 14-17 inches.  While hopping around various creek mouths and drains, we picked up a redfish and a few medium sized speckled trout with the same techniques. As the tide started coming in and getting high enough to get into Ocean Isle, we made a quick run into Tubbs Inlet on the last few hours of the incoming tide.  Working grassy edges, potholes, and drop offs on the edge of shoals, is where we found all of our fish in Ocean Isle. In just 2 hours of fishing the rising tide, Saul and Doug managed to land over 20 flounder, with the biggest fish weighing 4 pounds!  The inshore fishing in Myrtle Beach has been outstanding, and will only get better!

Had the pleasure of fishing with Jillian and her father today. With the flounder bite being so consistent, and the tide being just right, I decided to start fishing in Ocean Isle NC during the last couple hours of the incoming tide, which has seemed to produce the most Flounder. Working mud minnows on 1/4 oz jig heads in deep holes and creek mouths was the ticket today.  With half a dozen keeper fish caught in just a couple hours with many marginal fish mixed in, I decided to head out to a couple other spots on the falling tide to see if we could target black drum and redfish.  After hammering a few spots in sunset beach and Bonaparte’s creek with Vudu Shrimp and Trout tricks, and little love, I made a quick run to calabash river to fish the low tide.  Fishing around exposed oyster beds with Carolina rigs and cut fresh shrimp, produced a few nice black drum and Jillian added another keeper flounder to the cooler while bouncing a pink vudu shrimp in a deep hole, on a grassy edge.  It was a great day of inshore fishing in Myrtle Beach!

As we know, the Spring fishing in Myrtle Beach can be outstanding for Flounder and it is one of the most sought after fish to catch here.  Although this is typically a little early for them, we all get excited when the bait shops start to carry live mud minnows.  I met my clients at eight sharp this morning and let them know we were gonna hit a few creeks for trout and redfish, but also wanted to give flounder fishing a shot.  We started off in Cherry Grove SC, which is typicallty a great spring time Flounder spot.  After targeting a few broken down trees for trout and shell bank for redfish, we ended up with a couple smaller fish, but still knocked out the target species.  As the tide began to rise, I worked my way back to stage up on Flounder.  As two of my anglers were making casts with carolina rigged mud minnows, I had the other two anglers tossing jerk shads and bringing them back with the tide.  We ended up with a dozen flounder, and three of them were keeper fish, but we let all the fish go to swim another day and grow another inch!  If you are looking for a fishing charter in Myrtle Beach, get in touch with us!

Timmy Sheridan and I set out this morning out of North Myrtle Beach, in hopes to target fish trapped in deep holes in the marsh.  Rigged up with nothing more than a couple dozen mud minnows, and Trout Tricks worms (Mood ring), we were both confident we would find a few!  It was gorgeous out, the wind was down and it just felt fishy out.  After a ten minute run to the marsh, we came up to a fork in the creek, which I happened to make a sharp left at, eventually leading us to one of the best bites I have seen.  With nothing more than one jig, in one color, Tim proceeded to wear out the big trout, with the biggest being 23 inches and also landed a solid 17 inch Flounder, who was later invited to the dinner table.  After hopping around to different deep holes in the marsh, we landed a few more trout and missed a couple reds, but overall it was a phenomal bite with the scenery you may not have known existed in Myrtle Beach.